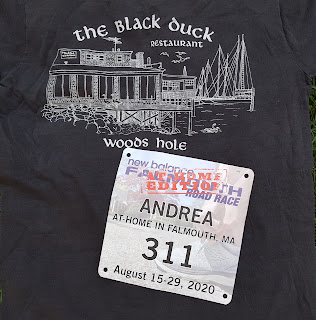 This August, instead of moving cones, directing runners, folding t-shirts, greeting VIP’s and generally running around putting out fires, I will be a participant in the Falmouth Road Race. This is not at all what I expected the end of the summer 2020 to look like for me. I am sure that most people are saying the same thing, our lives having been upended by COVID-19 and all the changes that we have been forced to make. In fact, back in February, I was asked before being offered my new job if I ran the Falmouth Road Race? To which I replied, “I have but I am never running that race again!” I immediately regretted blurting out my true feelings until I was told that my answer was pretty much what they were looking for as race organizers have no time to even think about participating in the Falmouth Road Race during the madness of race weekend.

I pride myself in handling crazy, busy situations from working in retail during the height of Christmas season and at a more recent job, corralling customers at the Street Fair held on Main Street in July so, I was actually looking forward to an insane week of working the Expo, the race and the aftermath and of course, lots of t-shirt folding. When Falmouth Road Race made the decision to move to a virtual event that would invite runners to participate “At-Home” instead of organizing the logistics of getting 12,800 runners to the starting line in Woods Hole on the second Sunday in August, everyone on the team decided that we could "run" this year and wouldn’t it be fun to actually be a part of it? Yes, that idea was “fun” in April. Training or should I say, dragging my body through barely four miles, hoping I will eventually be able to do the required seven in the August heat is a special type of torture. Now, I remember why I said to my future boss, “I am never running that race, again!” I should have known those words would come back to haunt me.

The first time I ran, I truly did not know much about the race other than the crowds clogging the streets along the shore and having to leave for work earlier than any other summer morning to ensure that I would arrive in time for my shift at a busy restaurant in Woods Hole located right on the starting line. I am sure my friends and I all thought it would be a great idea to run the Falmouth Road Race when we mailed our applications in February of 1986. It is likely that we planned to run it together not thinking about how we would coordinate our hectic summer work schedules and convince our bosses to give us that Sunday morning off during one of the most insane weekends of the season. The restaurants and resorts needed all hands on deck to accommodate the crowds that invaded the town for race weekend. I was still unsure if I was actually going to run the race at all coming into the month of August. I worked a lot of hours as part of the kitchen staff and I was often so tired when I wasn’t at work on my feet all day that I didn’t run at all that summer. Not that I especially liked to run, anyway.

When one of the cooks who worked with me started spouting off about running the race, I casually mentioned that I had a number and was thinking about doing it, as well. He was so glib and cocky that I ended up being swept up into the kitchen banter that night and somehow agreed to a bet to see who would run the race faster. What was I thinking? Since I had never run the route before or even ran seven miles together at one time, I really don’t know what possessed me to say anything about it.

My boss pulled me aside between orders and yelled into my ear to be heard over the hood fan sucking all the smoke and hot air out of the kitchen.

“You better kick his ass” she hissed in my ear. "And you have to wear one of our t-shirts."

There would be no backing out now.

I was nervous that morning, afraid I wouldn’t make it to the finish line, forget beating that arrogant cook in the race. But I had a few aces in my pocket: I was only seventeen, just home from a week of field hockey camp where we sprinted and ran miles every day, all day from 8:00 am-8:00 pm and I didn’t drink lots of beer after working a fifteen hour shift like the older, college age cooks in the kitchen.

We ran slowly at the start, jockeying between bodies trying to find some space to open up a longer stride. Then, once we neared the lighthouse, he turned to me and said, “Don’t try and keep up with me!” and sprinted ahead into the crowd of runners. I was stunned. I guess I thought he would run with me for a while, the bet only a joke, a way to pass the time at work.

So, I ran and took in the scenery, trying to figure out how far and long I had to go. I was a little scared but comforted myself with the idea that there were so many people running and cheering on the sidelines that it would all work out. Then, into about the second mile, I saw him up ahead. I began to feel good, even strong. I knew in that moment I could take him and beat him to the finish line. Especially since he chose to wear work boots to run seven miles. As I came up behind him, I yelled, “Don’t try to keep up with ME!” and sprinted ahead so that I was no longer near him.

The story of my first race ends with a crazy busy summer night in the kitchen back at work that evening. (No, we could not get the entire day off.) And me collecting on the bet I didn’t think I could possibly win.  For my prize, he bought me a handle of vodka and the biggest bottle of Peach Schnapps they had on the shelves at the Woods Hole Liquor store. Fuzzy Navels and Sex on the Beach drinks were all the rage but I had never had one back then. Just as well, my best friend’s older sister and her friends commandeered the booze for an after work party before I was forced to figure out what to do with it.

The weather was typical for a Sunday in mid-August that year: hot, humid and sunny. But on occasion there have been some tough conditions. Fortunately, I didn't personally have to deal with them. My friends and I became huge fans of the party scene on Road Race Sunday and it certainly helped that one of my closest pals lived just behind the ball field at the finish line. That was my experience of Road Race until the year that I agreed to run with my then fiancé and soon to be husband. In 1999 it rained like crazy on Saturday night into Sunday morning. But the race was still on in spite of the deluge. My father’s truck tires splashed water over the windshield from the enormous puddles that had formed all night as he drove us to our impending doom at the crack of dawn on race day. When we arrived at the starting line and we hopped out of the truck to join the thousands of already drenched runners, I stupidly declined the black trash bag he offered to keep me dry.

Of course I did it, I’m not one to give up but I really didn’t want to run. I knew within minutes waiting in the coral at the start that I would soon be soaking wet and miserable. I don’t even like to run through a hose held from a ladder, showering runners as they go by on the sunniest and hottest race day. About 3.5 miles in, half the race through, along Surf Drive Beach, I just wanted to stop. The water had flooded this stretch of road so it felt like trudging through knee deep water in the ocean located just feet away. But if you’ve ever run Falmouth before, you know if you made it that far, you might as well keep going. There was no sense in throwing it away at that point regardless of the horrible circumstances.

The rest of the 7 miles was as cold and miserable as anyone can imagine. Rivers of water pooled in the streets. Soaking wet spectators cheered us on as it continued to rain throughout the morning. When I heard my father in his orange rain gear and my mother under her yellow striped umbrella yelling our names as we rounded the bend at Scranton Ave. and Robbins Rd. (behind the 7-11), I knew I didn’t have far to go and all I could think about was a hot shower and dry clothes. Finally we climbed the last hill and crossed the finish line. I don’t even think we tried to wait under the tent on the ball field to grab a hot dog before we made a beeline for our car parked conveniently at our faithful friend’s house on North Grand Ave. where the party had already begun before the starting gun went off in Woods Hole.

I got my shower and warm clothes then cruised on back to the party which I should have left early but I know I didn’t. (I always took the following Monday off from work ;)) But I vowed, and I have kept it until this year, to never ever run that race again! 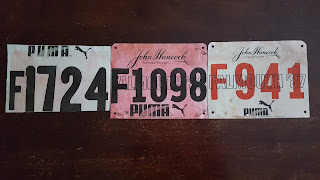 When DeKuyper Peach Schnapps became all the rage in the 1980's, Fuzzy Navel, Sex on the Beach and the Woo-Woo were popular drinks served at the huge post race parties held at the Wharf overlooking the Heights beach at the Falmouth Road Race finish line. These cocktails are various combinations of vodka, peach schnapps and fruit juice (orange or cranberry) and way too sweet for me. They will also give you a killer hangover! Here is an updated version of the Woo-Woo which was served as a shot. The addition of lime juice makes it less sweet and creates the perfect post race celebration cocktail! 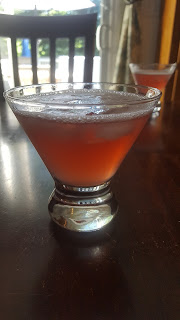