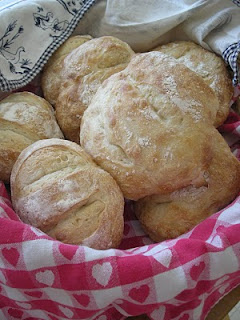 The preschool bus drops Declan off at 12:00pm. As we walk into the house,I ask him about his morning: who did he play with?, did he give the note to the teacher? Declan throws his Spiderman back pack on the floor in the office then tries to pull his sneakers off without untying them; the double knots I tied this morning are too difficult for him to undo.
"What do you want for lunch?"
"Uuuum. Butter sandwich." Declan says as he nods his head and smiles, trying to get me to agree.
"How about grilled cheese with ham on bread and butter?"
"No, Just bread and butter. On the bread that is shaped like this." Declan makes a circling motion around his head. What bread is shaped like that?
"I don't know what you mean. What kind of bread is that?"
"You know, mama, the kind you make!"
There you have it. Not only do I have a problem with my son's choice of sandwich. Where's the protein? Bread and butter sounds like jail food. But, he also wants this "bread and butter" on fresh home made bread, at that. I figured that any homemade bread would do. After all, the kids (my daughter, Ava is also a bit of a bread snob. Although she will eat her peanut butter and jelly on store bought whole wheat)both enjoy Val's Delicious white bread especially when toasted and coated with butter, affectionately known in my house as "butter toast". With this in mind, I made a lovely foccacia bread recipe and instead of making the usual rectangle, I shaped it into loaves. Sounds good, doesn't it? No chance. The kids will eat it as garlic toast at dinner time but not as a bread and butter sandwich after school.
The bread in question is actually easy to make but time is a huge factor. A few ingredients are merely mixed together and left to rise on their own. The problem: the first rise is at least 12 hours. Obviously this requires a bit of advance planning if I am going to serve bread and butter for lunch.
The other day I only had wheat bread from the store left in the drawer. I managed to talk Declan into eating a yummy grilled cheese and ham with lots of butter on the bread. He sat down in front of the t.v. eager to enjoy his chocolate milk, sandwich and an new fangled episode of Batman "with wings". He said "Thank you" and took a big gulp of milk, his eyes glued to the t.v. A few seconds later, from the kitchen I could hear him whine, "AAAWWWW! This isn't the bread!" I can't believe I actually had to explain to him that mommy can't always make the special bread. And when he bent his head down and began to pout, I recovered quickly before he could whine again, "But I'll try and make it tomorrow, o.k.?"

This bread recipe is supposed to be baked as a large loaf in a preheated dutch oven. It's from Jim Lahey's "My Bread". (It's definitely worth purchasing the book for all the other great recipes, too!) I have made it that way and it's quite delicious, perfect for a larger group. It also has a chewier, thicker crust. I now separate the dough into 4 small free form loaves which yields a softer crust.

Mix flour, yeast and salt in a large mixing bowl. Slowly incorporate water until a dough is formed. (It will be hard to mix, don't add too much water.) The dough will be slightly dry. Cover tightly with plastic wrap and leave in a warm area away from drafts. Let rest for 12-18 hours. At this point, the dough should be bubbly, doubled in size and sticky. Grease a cookie sheet. Remove dough with a rubber spatula onto a generously floured board. Using spatula (or scraper) turn the dough over so that all sides are coated with flour. Do not knead!!! Cut into 4 equal pieces. Gently form each piece into a ball shape by tucking edges under and place on greased cookie sheet. Sprinkle the top of each ball with about 1 tablespoon flour. Place a towel on top and let rise again for two hours in a warm spot. (Be sure to use enough flour on top of dough so that the towel will not stick.) After two hours, preheat the oven to 475 degrees. Slash tops of loaves with a sharp knife and cook for 10-15 minutes until light brown. Remove to wire rack to cool. Share if you want to.
at October 09, 2010 No comments: