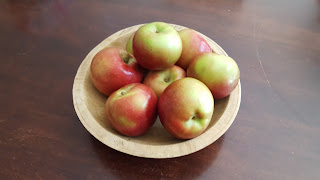 I made applesauce to go with dinner the other night.  I needed something quick and satisfying to round out the meal. Warm, spiced applesauce seemed just right on a rainy, damp October evening.  I used the same technique I have seen my mother, Val use throughout my childhood.  Peel and slice any type of apples, usually Macoun or Macintosh, about one per person.  Add sliced apples and about a teaspoon of cinnamon, a few tablespoons of sugar, a little nutmeg, maybe some lemon zest and a little water in the bottom of the pan.  Cover and simmer on the back of the stove while you make the rest of dinner.  Once the apples have turned into a soft mass, serve them.  Cold leftovers are delicious, if you end up having any, at all.
After Ava arrived home from field hockey practice and dance class, she sat down at the table and devoured every last sweet morsel along with the rest of her dinner of corn cakes and garlic and cheese sausage.  Between bites, she began her interrogation:
"What kind of apples did you use?" she asked.
"The ones that have seen better days, they were rolling around, forgotten in the vegetable crisper and no one wanted to eat them,"  I replied.
"Is this Gramma's recipe?"
"There is no actual recipe.  A little of this and that. But it is the way I remember her making it."
"Oh," she said and looked off into the distance as she thought about it for a minute, as if trying to  recall something in the back of her mind, that was just out of reach.
Ava doesn't know that she comes by this love for sweet mushy, cooked apples seasoned with cinnamon and nutmeg, quite honestly.  It began early on, during that seemingly endless pregnancy almost fourteen years ago, I had insatiable cravings that came and went in waves alternating with bouts of nausea.  I was out of my mind for a variety of exotic fare: whole bags of juicy naval oranges, tiny mandarin orange wedges that came in small cans, swimming in syrupy liquid, sweet and salty Hawaiian pizza made by Kosta's down the street, studded with canned pineapple and chunks of deli ham, which I ate just about every night for dinner.  But by far the most soothing snack on my list of must haves during the time Ava spent in the womb was apple crisp.
But not just any apple crisp.
In an effort to tame some of the side effects from that brutal gestational period (along with the cravings and nausea, there were intense emotional mood swings rivaling those of Jekyll and Hyde), Val dragged me to a weekly yoga class. It was held upstairs in the Rec building in a room over the basketball courts.  While the Men's Over 40 Basketball League played heated games: Dino's Bar v.s. Wizz Barbershop and co-eds mingled during Adult Volleyball, I pretended to stretch myself to my limit in the name of bettering my health during pregnancy.
I barely attempted each tortuous yoga pose. I held my breath instead of breathing into it. My mind was not at all mindful. It was all I could do to keep myself from gagging during Downward Dog. I couldn't wait for the Sun Salutations to finally set. I counted the minutes until Savasana or Corpse Pose. The one at the end of all the exertion when you are finally allowed to lay on your back and restore yourself.  The pose is meant for about twenty minutes of quiet reflection, meditation and giving thanks.  Thank you for my strong body, for this invigorating class, all this positive energy flowing freely and blah, blah blah...  But I could barely make it through five minutes, my thoughts were far from transcendental contemplation, instead I was completely distracted by the baby swishing around inside of me making me feel anxious and hungry at the same time and the apple crisp that could make it all better.
The thing that really got me motivated to go to yoga class after dark on those chilly fall evenings when I could have been snuggled up on the couch watching "Friends" re-runs and devouring one of the fore mentioned Hawaiian pizzas was the promise of a post yoga trip to the local Hearth 'n Kettle.  Hearth 'n Kettle is a chain of restaurants unique to Cape Cod and the southern shore of Massachusetts offering hearty New England fare such as beer battered fish and chips, thick creamy clam chowder and hot turkey sandwiches with cranberry sauce, smothered by ladle after ladle of gravy.  The desserts are typical Northeastern diner style: Indian pudding, Grape-nut custard with real whipped cream and of course, apple crisp served hot with a perfectly rounded scoop of vanilla ice cream.  As if on cue, my taste buds began to salivate as soon as I unrolled my mat every week.
It's a good thing yoga pants are forgiving.  I gained at least forty pounds while carrying Ava.  Those warm, soft apples scented with cinnamon and sugar under a blanket of crunchy, buttery oats and brown sugar with the cold vanilla ice cream melting into the crackly crags of the fall fruit dessert didn't help.  It took a long time, years in fact, to shed most of the weight. Some of it's still here and my baby will soon be coming up on her fourteenth birthday. But that won't stop me.  The heat in the oven begins to melt the butter and softens the apples, cinnamon scents the air in the kitchen and I have a brief memory of those endless days before Ava arrived. Every moment of discomfort, craving and hormonal meltdown; it was all worth it.

Preheat oven to 425 degrees.  Lightly grease an 8"x 8" glass baking dish.
In a large bowl, mix together the flour, sugar, cinnamon and salt.  Cut the butter into cubes and add to the flour mixture.  Using a pastry cutter or fork, cut the butter into the mixture until it resembles coarse meal.  Mix in the oats.  Set aside.
In another large bowl, combine the sliced apples, sugar, lemon zest, cinnamon, nutmeg and salt.  Mix to coat apples.  Pour apple mixture into prepared baking dish.  Cover apple mixture with topping.
Bake for 35-45 minutes until browned on edges and fruit juices bubble.  Remove from oven and cool on a wire rack until ready to serve.  Delicious served warm with vanilla ice cream or at room temperature with whipped cream. 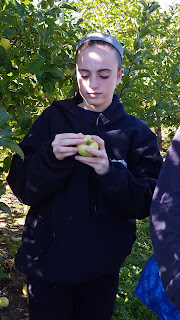