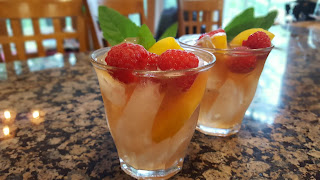 My friend, Deb loves winter.  She spends most of it at her escape home in New Hampshire where she gets her fill of downhill and cross country skiing, fireside dinners and snuggling under heavy blankets to keep warm.  But summer on Cape Cod is really where it's at for this Irish-American girl with roots in Kentucky.
Without fail, every year, on July 4th, at the annual Quissett village parade complete with decorated antique cars and kids on bikes tossing candy to spectators, she laments, "Summer is almost over!" as she waves a flag and cheers on the bagpipes and folks dressed in Revolution era costumes.
Ah, no.  It's really just beginning as the kids have only been out of school for a week.  But Deb likes to make the most of everything.  To squeeze out every moment and enjoy it all to its fullest.
So, here I am writing during the last week of July, reminding her (and me) that we are actually only half way through at this point on the calendar.  There is so much more fun to be had, sunsets on the beach, midday dips in the ocean , cucumbers and tomatoes fresh from the garden and ice cream heaped on cones dripping down our arms.
We should all have a friend like Deb.  I can stop by anytime, still wearing my bathing suit at 6pm, dirty, sandy beach feet that I have not yet had time to rinse off and a messed up head of hair from my large brimmed beach hat.  It is summer, after all.  So, when she says, "Tap on over for a drink."  while Ava is at dance (tap) class down the street from her home, I don't hesitate.  I know she means it.
I love that Deb puts together sliced salami, sharp cheddar cheese, pepperoncini and Ritz crackers.  I bring my new creation, "Fancy Cocktail Popcorn" to test out on her because I know she is game to try just about anything I make. She drags a wooden bench next to two Adirondack chairs on the terrace by her front door where marigolds, lavender and parsley are mingled together in over sized terracotta pots, white lights strung on the pergola overhead and a fan, plugged in and placed by our feet to compensate for the sticky summer heat and lack of a breeze on this late July evening.
In honor of Deb's Kentucky heritage on her mom's side, I created a cocktail with bourbon and gently sweetened peach iced tea.  Mint and frozen raspberries and peach slices round it out and dress it up.  Although, it's really Craig, her husband and high school sweetheart, who is the whiskey drinker, Deb embraces the concept of a Kentucky bourbon or even and Irish whiskey cocktail to honor her ancestors on both sides of her family.  She praises how pretty the drink looks as I snap a few photos.  She takes a few tiny sips but I know, that she is ready to switch over to her signature beverage: Kendall-Jackson Chardonnay poured over a large wineglass filled with ice.
We savor the moment on this summer night, have a quick catch-up, then it's time for me to get going to pick up Ava from class.  I think about the perfect ending to this hot, humid July day.  It is just about over and I'm ready to get out of my bathing suit and into my pajamas.  As the sun begins to set behind the tall pines in Deb's yard, I back the car out of her driveway, take a deep breath and think to myself, "I'm so glad this summer is far from over."

This is a refreshing way to drink bourbon on a hot summer night.  Named in honor of my dear friend who's mother hails from Kentucky.

Fill a shaker full of ice.  Add bourbon, iced tea and lemon juice.  Crush mint leaves in your hands and add to shaker.  Shake vigorously for 30 seconds until your hands stick to the shaker.  Strain into an ice filled rocks glass.  Garnish with extra mint leaves, peach slices and raspberries.

Steep the tea bags in a large heat proof container of boiled water for a few hours until cooled to room temperature.  Remove tea bags and discard.  Mix in honey until dissolved.  Store tea in a covered container in the refrigerator for up to one week. 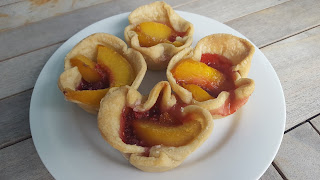