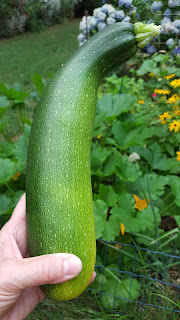 A contest is held every year at the Barnstable County Fair to see who can grow the largest zucchini. A first prize ribbon is bestowed upon the grandest of the green fruit. There are no other awards, no second place. You are either the biggest and the best or you are out of luck.

There are a lot of people on facebook showing off their zucchini harvest. The squash piled high, photographed on a kitchen counter, bad lighting and poor composition. The text imploring fb friends to send along their favorite recipes. I have a few recipes. But I don't have any zucchini.

I planted seeds early, in April. They did well in their flats and I transferred them to my small garden plot on the back side of my house where the sun shines all day. The plants seem to be thriving, covered in bright orange blossoms sheltered by massive green, fan shaped leaves. Where is the zucchini? I have yet to reap the benefits of babying these plants. Maybe not babying them, but watering them and shooing the dog away. That and keeping a vigilant eye for any pests who may invade. I once had a battle with a zucchini worm. I don't like to talk about it. Not only was it devastating but it was so gross, it makes me want to gag just thinking about it. So, I look under those big leaves everyday, searching for signs of hope but I haven't seen anything promising, yet.

Val has a good crop of zucchini this year but it's not yielding an overabundance. She gave me a pretty big zucchini which I promptly used in one of my favorite summertime recipes: Chocolate Zucchini Cake. Served warm and topped with vanilla ice cream or cut into small squares for my beach cooler, it really is one of the best chocolate cakes, ever. And it's one way to get my fourteen year old carnivore to eat some vegetables.

A tart made with a crisp biscuit dough filled with ricotta and Parmesan cheeses and topped with a layer or zucchini and/or yellow summer squash seems to please everyone and looks pretty impressive, especially if you are bringing it to a party. I've made other versions of this zucchini tart idea based on a classic one from Ina Garten. Crust, cheese and just a little vegetable, how can you go wrong?

Of course, there are methods of cooking zucchini that can go terribly wrong, in my opinion. Zucchini was a tough sell back in the 1980's when every restaurant on the Cape offered it as the classic summer vegetable side to accompany dinnertime entrees. Cooked ahead of time in large hotel pans, steamed with summer squash, carrots and sliced onions. "Summer Vegetable Medley" was scooped and served in white monkey dishes alongside expensive grilled swordfish steaks and filet mignon. Soggy and lackluster, I'll pass, thanks.

But by far the best recipe and one that is not often considered because of the work involved is Zucchini Relish. The recipe comes to us by way of Norma, my grandfather's second wife and her cousin Elmira from Lubec, ME. These women knew how to put up vegetables and in spite of the heat from the canning pot and the amount of chopping and salting, they managed to preserve just about anything that came out of a summer garden. I must admit that I didn't really like this relish until recent years. I was not a fan of the sweeter pickled taste. Maybe it's the bright yellow/green color or the appreciation of the effort, there is truly nothing better than smothering a grilled hot dog with this magical concoction of zucchini and spices.

I'm impatiently waiting and inspecting every morning with my coffee in hand. Hoping for enough zucchini for a batch of Zucchini Relish. There are a lot of buds that have yet to open hiding under those big leaves. Who knows, maybe I'll get enough from my harvest, when it finally comes, for two batches of relish this year. 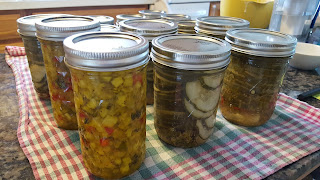 Combine zucchini, onion and salt in a large bowl. Set aside for 3 hours.

Drain thoroughly in a strainer by pushing water out with hands. Combine drained zucchini and onions with all other ingredients: cornstarch-vinegar in a large stockpot. Bring mixture to a boil then turn down heat to simmer for 30 minutes. Ladle zucchini mixture into prepared sterilized jars. Wipe rims and threads with a clean, damp towel. Place sterilized lids and rings on jars. Process in boiling water bath for 10 minutes. Remove processed relish jars to rest on clean towels on counter top overnight. The next day, test seals. If seals are tight, store in a cool dry place for up to one year.

**1 teaspoon black pepper "2 if you like!" noted on original recipe card

Val usually doubles this recipe as it is a lot of work and everyone likes to receive a jar for Christmas!

-Use new canning jars and lids. Re-using rings is fine.

-Sterilize all by running through a dishwasher cycle or placing washed jars, lids and rings in boiling water for 10 minutes.

-After placing filled jars in canning pot, bring water to a full boil, then time for 10 minutes. Be sure the water covers all jars with at least 1 inch of water during the process.

-Do not disturb jars for at least 8 hours.

-To check seals, remove ring, lift up gently on edges of lid. If lid stays secure, it is sealed properly and can be stored in a cool, dry place for up to one year. If lid pops off, refrigerate jar and use within one week.