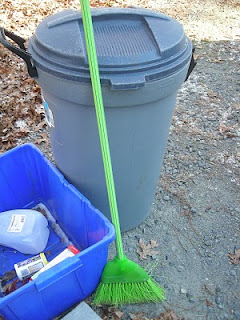 "It's green just like the other one. She'll never know!" Declan stage whispered to his dad. Well, maybe if I was not the one to request that Rob and he purchase a new broom, I could possibly have been tricked.
The old one was working fine. A little ratty on the ends and the top of the handle was missing, but it still got the job done. That is until the other day when I threw it out the door in anger and frustration.
I began to sweep the white linoleum floor that runs from the slider in the kitchen to the door to the driveway and into the downstairs bathroom. Everyday, there seems to be enough sand, food and dog hair to fill a gallon jug. So there I was about to tackle my daily (sometimes twice daily) chore. This time I started in the bathroom. I spotted a small brown rock that probably fell out of Declan's pocket (He always seems to picking stuff up in the yard.) and I decided to just sweep it into the pile. The only problem was that the rock, sort of smudged along the floor and got caught up in the plastic "straw" of the broom. By the time I stopped sweeping to get closer for further inspection, there were 3-4 brown streaks on the floor.
Suddenly, it hit me and I knew what it was. Declan had just been in the bathroom. I was still a bit puzzled wondering how this rock/poop ended up on the floor on the other side of the room, far away from the toilet. Then I began to freak out thinking, "How gross is all of this smearing and broom clogging?" AAARGH! I immediately opened the outside door and hurled the broom out of the door into the driveway. Then my head exploded.
"DECLAN!!!!! WHAT HAPPENED IN THE BATHROOM???!!!"
"Oh, I pooped my pants." He casually said from the desk where he was playing a computer game as if he were telling me that the phone was ringing or something benign like that.
"WHAT??? AND YOU DIDN'T TELL ME SO I COULD HELP YOU??!!"
Of course, that prompted tears and a bit of fear. Not the sort of emotional upset you want to make happen when you want someone to admit to something.
It took some calming down but we both got ourselves together and came to an agreement. Declan will tell me if he has an accident in his pants and I will not get mad. No problem, accidents happen but covered up or ignored accidents are always an issue.
I'll never know about the new broom, Indeed! Declan has a lot to learn about a mother's memory and blackmail for later use.
at December 17, 2010