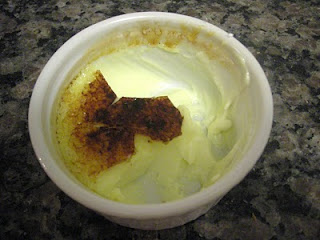 Last night, I engaged in a gluttonous dessert extravaganza that left me wanting to only eat lettuce for the next three days without even the tiniest flavoring of vinegar and oil.
My thirteen year old nephew, Ryson and I got together to create a confectionery feast for our family New Year's Eve celebration. To prepare his requested menu, we worked in my kitchen for two days beating eggs and scalding cream for creme brulee and dipping cookies to line our tiramisu. We melted chocolate, cooked caramel and set out potato chips, pretzels, Dunkin Munchkins and ginger snaps to dip in the sweet fondue. Oh yeah, we sliced some fruit for that, too. Hot, buttery and salty popcorn and spiced nuts rounded out the buffet with rich hot chocolate and cream soda to wash it all down. Since it was New Year's Eve, champagne garnished with blackberries and POM juice was featured as well but let's face it, champagne, proseco really any bubbly is welcome to the party ANY TIME.
Teenage boys especially love flames so the sterno under the fondue pot and the kitchen torch were Ryson's jurisdiction. He took on his responsibility with gusto, sugaring the individual Amaretto flavored creme brulee and blasting it with the blue flame until the sugar crystals melted into a hard, golden brown shell.Overindulgence came to a head when Ryson announced that he couldn't eat another bite of his umpteenth serving and Grampa Dick was so full, he went home to go to bed.
Gramma Val kept the party going by playing a spirited game of "Operation" with the little ones while Rob made Karyn and me a special holiday favorite beverage, "Nuts and Berries". When we broke out the "Apples to Apples" game, Uncle Dana was already fighting sleep even though he tried by drinking a Red Bull and some coffee.The kids could have stayed up all night but I couldn't make it. Even though I really wanted to see the "Wig Drop" on Bravo, I overfilled. So, just as I have in the past seven or so years since Ava came along, I went to bed before 10:00pm and woke up to a beautiful new year and the need to detox at least for breakfast, anyway. This morning, when I reached for the healthy egg whites (left over from all the baking), I think I saw some creme brulee hiding in the back of the fridge that I just can't let go to waste. 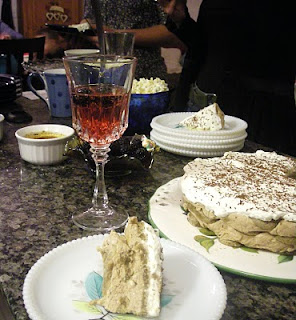 Preheat oven to 300 degrees.
In the bowl of an electric mixer, mix the eggs, egg yolks and 3/4 cup sugar until just combined. Meanwhile, heat the cream to scald until its very hot but not boiling. With the mixer on low, slowly add the scalded cream to the egg mixture. Add the vanilla and Amaretto. Pour into ramekins. Place the ramekins in 1 or 2 large pans and pour boiling water around them until the water comes about 1/2 way up the sides of the ramekins. Bake for 30-35 minutes until the custards are just set when gently shaken. Remove from oven and water bath and cool to room temperature, then refrigerate until firm.
To serve: sprinkle 2-3 teaspoons of large crystal sugar over the top of custard. Using a kitchen torch, heat sugar until it caramelizes and turns golden brown. Let sugar harden and cool for a few minutes and serve.
at January 01, 2011