Around here, the July 4th fireworks are a big deal.  Money is raised all year by gathering dollars and loose change in covered coffee cans at the cash registers of small businesses all around town and the selling of t-shirts and hats to commemorate the event.  This cash collection funds the barge full of pyrotechnics that will be towed out into Vineyard Sound in the hazy summer afternoon before letting off the massive display after dark.  Hoards of people descend along the beaches on that side of Falmouth. From Menahaunt, Bristol, Falmouth Hieghts and Surf Drive beach and everywhere in between, there is not an inch of sand to be had as the throngs arrive to claim their turf as early as 5:00 pm, hours before the event takes place.  People lay out towels, blankets and coolers full of beer and juice boxes.  These campers are here for the long haul.  The first burst of fireworks won't begin until at least 9:00 pm, well after they have drank through all of their supply and past everyone little person's bedtime.  There will be lot's of crying and the occasional fight will break out over space or loud comments and everyone will need to use the bathroom.  But they will persevere.  And the show will be fantastic, exhilarating and loud, as long as the fog doesn't roll in to spoil the view.  After the show is a test for all men, women and children. The traffic is unreal.  At least an hour of gridlock snaking down every windy beach road to finally get back on the highway on the edge of town.  They might get home by midnight, if they are lucky.
I can't stand it.
It's not that I don't like the sensational burst of patriotic red, white and blue in the night sky, feeling the boom in my chest as each one goes off, anticipating the glorious burst then watching as it drips and drops into the soft edges of the skyline.  Once, Rob and I were on our way back to Val's house after seeing a movie when we spotted fireworks being shot off in the distant sky.  We quickly pulled the car over and enjoyed the show on a grassy hill of the golf course adjacent to the theater.  Other people did the same: a couple here, a family of four there, spilled out of their cars to catch the sight.  All gathered at the spur of the moment to enjoy just that- a fleeting moment in time.  No haggling for space or hours waiting.  A surprise fireworks show glimpsed between the trees on a warm summer night.  Now that's my kind of experience.
So, I say "No, Thank you." to the damp, salty, night air, the whiny, tired children, the loud drunks and the sand fleas.  I will avoid the massive crowd at all costs again, this year.  Perhaps, from another part of town, in my travels this summer, I will by chance see some explosions of color in the night sky.  Until then, I will continue to listen to the Falmouth fireworks in the far distance on the 4th of July. 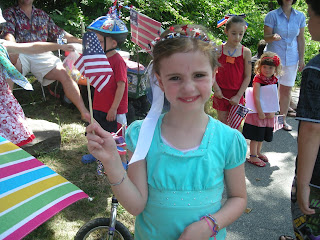 Heat oven to 300 degrees
Pour white chocolate chips onto a rimmed baking sheet lined with parchment paper.  Heat chocolate in oven for 3-5 minutes until the chips begin to melt.  Remove from oven and smooth out chocolate with a rubber spatula.  Sprinkle Pop Rocks on top.  Slide chocolate covered parchment off pan and allow to cool completely.  Once cool and dry, break up chocolate into large pieces.  Store in an airtight container for up to 3 days.