The charm bracelets are gold. Real gold, not gold plated. They are heavy and awkward to wear. They call attention to themselves. My grandmother wore both of them at the same time. That's just the kind of lady she was.

My sister, Karyn has one and I have the other. I wear mine on special occasions mostly because it's fancy but also because it is impractical for everyday. The dangling charms constantly hook on sweater loops and get snagged on loose fabric. I love it. The charm bracelet I acquired is filled with memories of my grandmothers life as a jet-setter. The soldered tokens representing exotic cities, countries, continents she visited: Rome, Australia, Africa, Sweden....

She and her husband, Dr. Edwin P. Tripp, Jr. went on long trips around the globe and spent many of their winters in Englewood, Florida (on the west coast of the state). Upon their return, they hosted long, drawn out slide shows in their finished basement. I don't remember much of those events except for the musty smelling carpet and that I was always bored by the scenery photos. When the projector, whirring loudly and threatening to overheat, clicked to an image showing familiar faces, I perked up but there were hardly any of those. I was a little kid after all and when I saw a blurry shot of the African plains or the Australian desert, it all seemed to blend together in my mind.

She brought collectable dolls to me and my sister from the places she went. A man and a woman in traditional African clothing (from which country, I do not know), two wooden horses from Sweden, mine is orange, a navy one for Karyn. Those are the ones that stick out in my mind, most of all for the colorful clothing and because I still have my wooden horse housed safely on a shelf above my collection of cookbooks. There is one other standout: a very small doll, dressed in a light blue gown in the style of late 18th century European royalty: tight corset, full, billowing skirt, her white doll hair fashioned into a high pouf. I was enamored of this tiny delicate figurine. Too young to understand the adults' jokes poking fun and asking why she still had a head, I thought to myself, "Of course, she had a head! Why would my grandmother ever think to bring us a broken doll with out one?"

The Marie Antionette doll must serve as evidence that my grandmother visited France and likely Paris to be exact. But there is no proof in gold. Considering that one of the most iconic and recognizable charms to ever grace a bracelet of collected memories is one shaped as the Eiffel Tower, I wonder why there is not such a token on either bracelet?

Whenever I wear my bracelet, I rotate through the charms, examining one at a time, imagining her travels: the African lion, the Australian kangaroo, the bagpipes, the Viking ship, the statue of the she-wolf with Romulus and Remus. So many places, so far across the globe, so many memories. Such an exciting life, wanderlust fulfilled! It makes me long to book a fight to... anywhere.

There is one charm that is constantly getting caught on everything due to its natural shape: a hook. If you don't recognize it right away, you may think it looks like an arm flexing a bicep muscle. Nope. It's a place. While it is not her birthplace or where she grew up, she called it home for most of her life. I find it interesting that this charm has a home on the bracelet nestled among all of the symbols representing far away foreign places. Perhaps it served as a reminder: No matter where you go, the people who love you will always be waiting for you to return home. 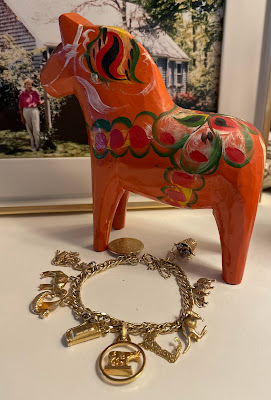