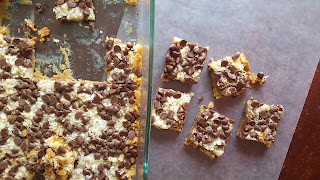 We played the boombox as loud as we dared from the back seat of the bus. Prince and Chaka Khan blared through the speakers. We hoped the coach wouldn't yell for us to turn it off as long as we didn't sing too obnoxiously over the music (is there any other way?). Usually it was the same song played over an over again by rewinding the cassette tape until it finally wore out that made the bus driver and the coach pull the cord on our fun.

Two paper shopping bags wedged between our feet on the floor covered, hastily hidden with our Falmouth Athletics gray warm-up hoodies were filled with oranges cut into quarters then stashed into plastic twist-tie bags -enough for both home and away teams. At the beginning of the season, our mothers signed up to "bring" oranges to games on the schedule. Today was Val's turn. In her usual fashion, instead of me having to lug the half-time snack to school, she dropped them off at the main office. I was promptly summoned by the school secretary over the intercom during last period, sophomore English. But of course, Miss Mormon, that crotchety old lady would not let me leave even for just a few minutes before the last bell.

Jenny and I crouched down behind the seat in front of us, quietly pulled a tinfoil wrapped package from the bag of oranges and slowly opened it. We had to cradle it gently as not to spill the contents. We found layers of still slightly warm chocolate chips, chewy coconut and buttery graham crackers cut into perfect 2-bite sized squares signaling Val's intention for us to offer them to all.

Our attempts at keeping the treats a secret didn't last long in a bus jammed with teammates who are use to sharing everything from lockers, gossip and the occasional pair of socks. Jill, sitting in the seat in front of us, immediately knew something was up when our heads disappeared mid- conversation. She leaned over her seat and became part of the secret snacking. That was all it took. The clandestine information rippled and spread from a small cluster of seats throughout the rest of the bus until everyone had a piece of sticky goodness in hand. It's a good thing Val had carefully portioned and packaged what appeared to be at least two batches of Magic Cookie Bars. They were devoured in an instant, just in time for us to belt out our version of "I Would Die 4 U" before pulling up to the field, ready to play.

Place butter in 9"x13" baking pan and place pan in oven until butter is melted. Remove pan from oven. Add Graham Cracker crumbs, stir to coat. Spread mixture evenly to cover the bottom of the pan. Pour sweetened condensed milk evenly over the bottom of the Graham Cracker/butter mixture. Sprinkle shredded coconut evenly over the sweetened condensed milk. Sprinkle chocolate chips evenly over coconut. Using a wooden spoon, spatula or your hands, press down on layers to compress so that they will stay together better when portioning.

Bake bars for 25-30 minutes until edges begin to brown. Remove from oven, run a knife around the edges so the bars won't stick and allow to cool for at least an hour before cutting into squares.