Something should have stopped me from buying all those strawberries but when it comes to fresh, native berries, I really do not have any willpower, at all.  And, when Val and my aunt, Janet offered to help pick them, well, how could I say, "No."?  The berries were practically leaping into the boxes I brought.  Probably too many boxes, I realize now.  But it's just so damn exciting to go strawberry picking at Andrews' Farm after a long New England winter.  Let's just say that I really supported the local agriculture that day.  Six flats of berries at only $3.99 per pound is a steal but that doesn't mean I didn't break the bank a little bit. 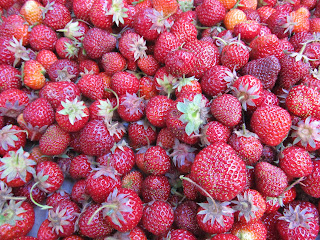 "What are you going to do with all of these?" my aunt asked.  She had a large container for herself that I am sure will be gobbled up by the time she gets to her home in New Hampshire.  Val planned to share her one flat of berries, as well.  I was going to make jam and stash some berries in my freezer along with some of Val's rhubarb for when I really need a fix next February in the form of a strawberry rhubarb pie. Although I suffered a small hit of sticker shock, I did not realize at the point of sale that I probably did not need all that I had hoarded.
Once I got home, I began to analyze my haul.  It turns out, two flats would likely have been enough.  So, now what?  After making a double batch of Val's recipe for strawberry jam, freezing multiple berries on sheet pans and stashing some in the refrigerator for immediate consumption, I still had two full flats left.  I was a glutton.  I was obviously greedy.  Now, I had to pay by coming up with creative ways to utilize this delectable, delicate fruit.  It would be the ultimate sin to let it go to waste.
My right hand was already stained deep red, and my left thumb and forefinger sore from the scraping of the paring knife as I hulled and cut up each berry.  As I continued to work: washing, hulling, cutting, I remembered I have a dehydrator for fruits and vegetables.  After dusting it off and slicing enough berries to fill four trays, I plugged it in and inhaled the strawberry aroma it gave off in my office where it's whirring fan did the job of shrinking and concentrating the essence of strawberry in each piece.  The result is intense strawberry flavor for cookies, cakes and even to dress up a bowl of breakfast cereal.  But wait!  I still had a lot more berries to use and they seemed to be getting riper as the day wore on.
So, I roasted some in the oven with balsamic vinegar, a touch of sugar and a pinch of salt.  Not sure yet, how I will use these.  Perhaps on a cheese plate to drizzle over a slice of brie cheese or some homemade ricotta?  Sounds good to me.  And last but not least, today I made some strawberry syrup from berries macerated in sugar and lemon juice.  I cooked the juices down then added some pomegranate syrup, black pepper and a pinch of salt, an idea I lifted from one of the many jam making cookbooks I have on my shelves.  This proved to be a nice addition to my Rhubarb Margarita recipe, another springtime ritual that I look forward to but hopefully have the foresight to put on the brakes early, before I overindulge.
After two days of picking, washing, hulling, slicing and processing berries, I hope I have learned my lesson.  Less is not necessarily more but I should slow down when it comes to strawberry picking.  It's early in a summer season full of so many of my favorite produce.  My freezer is already pretty full and I need to save room on my basement shelves for pickles and other preserves from the garden.  It's important to pace myself considering all the abundance that summer on Cape Cod promises.  Now, if I can just remember this lesson in August when the tomatoes are heavy on the vine... 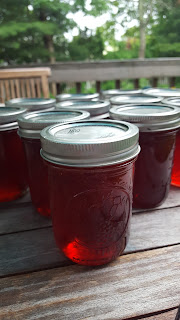 This jam tastes like my childhood.  Every time I make it and take the first bite while testing a batch, it brings me back to elementary school lunchtime:  peanut butter and jelly sandwiches on Val's homemade bread neatly wrapped in wax paper.

Wash and hull berries, place in a large bowl.  Crush berries, leaving large chunks.  Measure fruit into a 6-8 quart pot.  Add sugar.  Mix thoroughly.  Add butter to reduce foaming.  Bring mixture to a full rolling boil over high heat while stirring constantly.  Quickly stir in pectin.  Bring back to a full rolling boil.  Continue to stir constantly and boil for one full minute.
Remove from heat.  Skim off and discard all foam using a large metal spoon.  Immediately fill sterilized jars leaving 1/8" head space at top.  Carefully wipe mouth of each jar with a damp cloth then cover with sterilized lids and rings.
To process: place each jar in a canning pot and cover top of each jar with at least 2 inches of water.  Bring water to a rolling boil and boil for 10 full minutes.  Turn off water and allow to rest for 5 minutes before removing jam jars from water.  Allow jam to rest overnight.  The next day, check that each seal is secure.  If a seal is loose, refrigerate that jar of jam and use within 2 weeks.  Otherwise, jam is best consumed within a year. Store in a cool, dry place.