Throw Back from The Falmouth Bulletin December 2011: Lessons from Val's Kitchen, "Mrs Fake"

This post is a throw back from The Falmouth Bulletin published in December, 2011 under the column, "Lessons from Val's Kitchen".  My grandmother certainly loved to have fun! 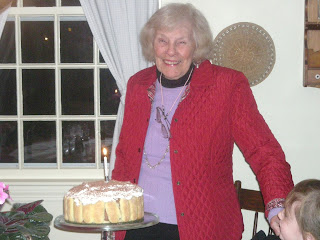 Mrs. Fake
If you have read any of my stories, you probably already know that everything Val makes is strictly from scratch. On top of that, it’s always fresh. She actually gets up at 4:00am on Thanksgiving Day to bake the pies. That’s how important it is to her. I’m not lying. There are no short cuts, just techniques and recipes that detail the right way of doing things. You may be surprised to know that her mother, Edie, does not subscribe to this folly.
I often say that Val, my mother, was doing what Martha Stewart made popular like making homemade jam from freshly picked strawberries she grew in her own garden, long before Martha was a household name. I’ve just come to realize that my grandmother, Edie is also ahead of her time. She was using mostly store bought ingredients and combining them to make it her own way before Sandra Lee came onto the scene with her “Semi-Homemade” approach. This is Edie’s classic technique.  She even earned the nickname, “Mrs. Fake” lovingly bestowed upon her by my smart-aleck aunt, Janet. Edie knows how to take advantage of modern conveniences so that she can get on with the business of having a good time.
Edie has done a lot of entertaining throughout the years. I have always loved hearing about the parties she had and the names of the guests who attended the night before. The phrase, “Cocktails and hors d’oeuvres” is still magic to me especially when she says it in her sing-song voice. The hors d’oeuvres she served were very exotic: Vienna sausages, Swedish meatballs and fancy pink and orange cheese served in a crock. There were signature cocktails, too: vodka and Fresca, vodka and 7-Up and vodka and Cranberry. One time, I was lucky enough to be invited to help take coats at one of her fancier parties. My friend Jenny and I were 16 and we dressed in our finest to greet guests and lay their heavy fur coats on my grandmother’s bed. Then we escaped to the kitchen to sample some of the food and stole up to our room to giggle the night away. I’m not sure how late the festivities went on but I know we were asleep before the party goers began to leave.
There were family holiday dinners as well, one where Edie attempted to cook a large turkey in her new microwave. Unfortunately, that method did not catch on. But other useful tips and ingredients are still in play in households across the country today. Cool Whip comes to mind. Many people love the stuff. I have only had the pleasure at Edie’s house. As you can imagine, Val demands freshly whipped cream when adorning her homemade pies and cakes. I’ve recently come across two of Edie’s recipes that require little effort for seemingly homemade type results. Both of them employ the magical frozen stuff. One is a strawberry pie using three ingredients and absolutely no cooking. Two containers of Dannon strawberry yogurt, Cool Whip and a premade graham cracker crust is all that is needed to fool your friends. But my favorite one is actually pretty impressive. This dessert can be found in “A Collection of Powell Recipes” typed and photocopied by my mother’s cousin, Susan Hackley, June 1988. It was also featured in “Simply the Best Course”, the Woods Hole Golf Club centennial cook book. If you don’t have the good fortune to own either one of these tomes, the recipe is reprinted below. Please be sure to heed the warning that Edie wrote at the end of the directions:  “Very Rich!”  Sandra Lee, eat your heart out!

Add 1 tablespoon sugar to 1 cup cream and whip until soft peaks form. Place in refrigerator. If using Cool Whip, omit this step.
Melt the chocolate over low heat. Remove from heat and transfer to mixing bowl. Add the cold water, 2 tablespoons sugar and vanilla and combine with electric mixer. Beat in egg yolks while chocolate mixture is still warm; continue to beat on low speed for 5 minutes. In another bowl, combine the egg whites and one tablespoon sugar. Beat until stiff peaks form. Fold in ½ of the whipped cream or ½ of the Cool Whip. Combine egg white/whipped cream mixture with chocolate mixture.
Line the bottom and sides of a 9” spring form pan with enough plastic wrap to hang over the sides.   Place a layer of ladyfingers along bottom and sides of pan. Pour a layer of the chocolate mixture over ladyfingers; add a layer of ladyfingers, then chocolate mixture until there are three layers, up to the top edge of the pan. Cover cake with plastic wrap and freeze cake for 24 hours. Thirty minutes before serving, remove cake from spring form pan by inverting it onto a serving plate, then releasing the pan.  Cover the top and sides of cake with remaining whipped cream or Cool Whip. Decorate with chocolate shavings and serve.

This holiday season, Andrea Norris can be found under a mound of freshly baked cookies. For more recipes and fun, go to http://www.notesfromvalskitchen.com