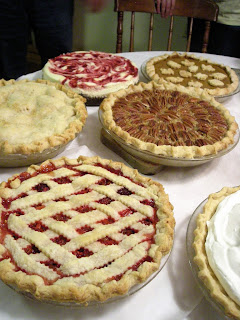 Mom’s Apple Pie
At Val’s house, one slice of pie is never enough.

“Pie is good for you.” My mother, Val has quipped many times.
“Just have a little sliver.”
Her version of a “little sliver” looks more like 1/4 of the pie to me. “Only eat what you want.” She feigns defeat hiding a knowing smile. Val’s victim can only protest as she cuts a piece and places it in front of them with a cloth napkin and a shiny silver fork. She watches closely until the first bite disappears. As if anyone could resist devouring the whole “sliver” once they have taken the first bite of the flaky, slice of heaven. It’s enough to put a person under a spell and suck them in forever.
All year, Val makes pies. When the urge to “have a little sweet” overcomes her, she mixes up the dough “it’s really pretty simple” and pours in the desired filling. In as little as an hour, the kitchen is filled with the heady aroma of fresh baked pastry.
Val’s casual pie making ends with a showcase on Thanksgiving. Late fall on Cape Cod is chilly and damp: the perfect weather for warming by the wood stove after the annual Falmouth vs. Barnstable football game. As we pull into the driveway, past Val’s flower and vegetable gardens that have been put to bed for the winter, my stomach rumbles with anticipation. The back door opens to the cozy kitchen. A twenty pound turkey is resting under a tinfoil tent as Val casually whisks her homemade gravy smooth. Most cooks would be frenzied. Val is calm; having risen at 4:00am to bake the pies. She would never serve day old to her guests.  And we, having been spoiled by Val, expect only the best.
Once the turkey and fixings are devoured and the plates cleared, Val sets up her serving station: pie server, knife, plates, dessert forks and lace napkins. All varieties are spread out before us: Classic Apple, Everyone’s Favorite Strawberry Rhubarb, Uncle Don’s Cowboy (a version of Kentucky Bourbon), Coconut Cream, Fall Pumpkin, and Mocha Macaroon to name just a few. It’s an intimidating display and Val is secretly proud of the gorgeous presentation. She should be. She has won blue ribbons at the Barnstable County Fair for most of them. The newest guest is asked to choose first what kinds of pie he would like. Val holds the pie server like a fencer works his sword: pointing and swirling it with a flourish as she names and describes each choice. Inevitably, our poor guest is overwhelmed and in need of guidance.  That’s when we, the pie eating veterans and members of the  “few slivers of each club” come to the rescue. Someone suggests a slice of Classic Apple, another insists on Uncle Don’s Cowboy Pie and someone else pushes their favorite.  Once the plate is overflowing with at least three choices from Val’s pie” buffet”, the newcomer will be initiated.

The best pies start with a light and flaky pie crust.

Place 2 cups flour, vegetable shortening and butter in a large bowl. Using a pastry cutter, work the ingredients together until small pea size pieces form.  Form a mound and make a hole in the middle.  Pour 1/4 cup of cold water over entire mound.  Blend with a fork.  Add more water and continue blending until mixture pulls away from sides of bowl.  Do not overwork!
Form 2 rounds, one slightly larger than the other (for the bottom).  Place on heavily floured board. Using a floured rolling pin, roll out from center (do not roll back and forth) until round is large enough to fill an ungreased pie plate and lay over edges. Fill according to recipe. Roll top portion of pie dough, place on top. Trim edges of dough, leaving 1" around pie.  Roll and crimp.  Cut slits in top of pie.
For a prepared pie shell: form bottom piece only. Crimp edges. Pierce bottom and sides with a fork. Cook at 400 degrees until edges are golden (about 20 minutes).

Val has won blue ribbons at the Barnstable County Fair for both of the following recipes:
CLASSIC APPLE PIE
(Serves 8)
Ingredients:
8 cups peeled sliced apples, (about 10 apples, whatever you have i.e. Macintosh, empire)
1 cup sugar
½ teaspoon cinnamon
½ teaspoon nutmeg
¼ cup flour
¼ tsp lemon zest
2 tablespoons turbinado sugar ( Sugar in the Raw)
Preheat oven to 400 degrees. Blend together all ingredients except turbinado sugar. Pour apple mixture into bottom half of prepared pie crust.  Cover with top pie crust, trim and crimp edges. Cut 3 slits in the center of the top crust. Sprinkle turbinado sugar on top. Place in oven and bake for 30 minutes or until juices bubble up through vent holes. If edges of pie crust start to brown before the pie is done cooking, take a large square of tinfoil and cut a hole in the center. Place tinfoil ring over crimped edges to prevent over cooking. To check for doneness, pierce pie gently with fork. If it easily goes through to bottom, the pie is done.  Don’t overcook or the pie will be mooshy. Cool on a wire rack for 30 minutes before serving.