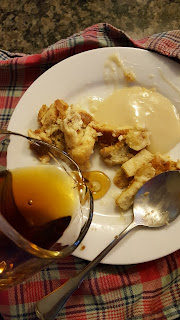 My lovely little boy doesn't like crusts on his sandwich.  Because I don't like to waste anything, I find this to be totally and utterly irritating.
So, in the morning when one of us makes his sandwich for the beach cooler or the lunchbox, we diligently cut off the crusts before spreading Nutella or butter for a roast beef sandwich, whatever his taste buds dictate that day.  The crusts are tossed into a plastic bag stored in the freezer awaiting their future fate on our dinner plates.  Every time I opened the freezer door this summer, the bag, growing larger by the day, tumbled off of its perch onto the floor.  Annoying.
Unfortunately, all I could think of to make with these crusts was breadcrumbs which I found to be even more annoying because, really, how much breadcrumbs does one possibly need?  Until yesterday, when it occurred to my overworked brain that I could make a number of variations of the bread pudding variety.  DUH.
The first recipe that came to mind was a long lost strata recipe made with goat cheese, loads of heavy cream, chunks of salty ham and rosemary, if I recall correctly.  Sadly, I have no idea where this recipe is now.  Also, I know my kids would not dare even try a bite, so that would leave me with a large pan of incredibly fattening fare to eat myself, although I'm sure Rob would help out.  But it is a really delicious dish for breakfast, lunch or dinner.
Next, I remembered making "Good Morning Bread Pudding" at the Kids' Culinary Camp I taught a number of years ago at Highfield Hall.  Now this is something Ava and Declan would surely be glad to eat.  And what about that delightful, creamy sweetened bechamel and bourbon sauce to go with it?  Talk about naughty.
With a few hours to spare on Saturday morning, I set about using up all those frozen crusts.  As I preheated the oven and whisked the eggs, Declan came sauntering into the kitchen, glanced into the pan that held the thawing crusts and declared, "I'm not going to like that."
Have I mentioned how much this picky kid makes me absolutely insane?
Needless to say, I wasn't very patient or nice with my retort, "It makes me angry that you decide what something tastes like before you even try it!"
Declan slunk away and hid under a blanket on the couch.
It must have been the smell of brown sugar and cinnamon baking in the oven, the scent of vanilla cooking in the sauce on the stove that brought him around.  Once I pulled the pudding out with its crispy, crunchy top and soft underbelly of eggy goodness, both kids came into the kitchen, noses sniffing the air, bellies growling.  Ava tried the sauce first and declared it a hit.  Declan gingerly did the same, then poured a bit too much on his plate.  He ate every last morsel before he held his stomach in protest against
another bite.
That kid drives me nuts.

Preheat oven to 350 degrees.  Grease a large casserole dish or a 9x11 baking dish.
In a medium saucepan, heat milk and butter on low until butter melts.  Remove from heat.  In a large bowl, combine sugar, eggs, cinnamon, nutmeg and vanilla.  Whip with a whisk until whites and yolks are thoroughly combined.  Slowly add milk to egg mixture, stirring the entire time as not to cook the eggs.  Place bread in greased pan.  Pour milk and egg mixture over bread.  Bake for 45-50 minutes until set.  Remove from oven and allow to cool for a few minutes before serving.  Serve with warm maple syrup and Bourbon Sauce (recipe follows).

In a medium sauce pan, melt butter.  Add flour and stir with a whisk to create a roux.  Allow butter and flour to cook for about 5 minutes.  Be careful not to brown the roux.  Heat milk for 30 seconds in microwave.  Slowly add to roux, stirring with whisk to prevent lumps from forming.  Add sugar and salt.  Continue stirring for 3-5 minutes until mixture bubbles and thickens.  Add vanilla and bourbon.  Cook for 2-3 minutes more.  Serve warm with bread pudding.