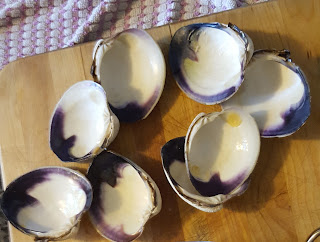 Until I was 15 years old, I never realized that there are people out there who don't know what a quahog is. Not to mention, those who cannot properly pronounce the word.  My summer job in a restaurant just around the bend from the ferry boat that carried mobs of tourists to Martha's Vineyard consisted of busing tables, giving directions and answering what I considered to be really dumb questions about Cape Cod that had obvious answers.
"What is a  'kway-hogg'?" They would ask me.  I kept myself from rolling my eyes and answered as sincerely as I possibly could for what seemed like the fiftieth time that day.
"A 'coe-hog' is a hard shelled clam.  The stuffed 'coe-hog' is chopped up quahog meat, added to stuffing, peppers, onions and linguica.  You'll like it.  You should order one."
In my defense, I had never been outside of my small hometown on Cape Cod except for a yearly family excursion to my grandfather's house in Maine for Thanksgiving.  I was unaware of the reality that the majority of what we call quahogs are concentrated along the coast between Cape Cod and New Jersey.  So, how could the rest of the world, the tourists from Ohio, Michigan and everywhere else, know about quahogs? 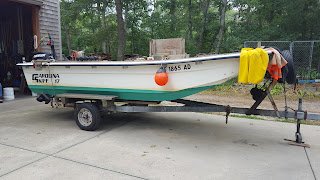 My childhood existed around these shelled creatures, loaded by the bushel into burlap bags that smelled of sea water, salt, mud and sweat.  After long days at his full time job working for the local electric company, my father, Dick spent his nights and weekends out on the "flats"  hauling up rakeful after rakeful  of shellfish, muck and assorted sea treasure found on the ocean floor.  He pulled it into his small craft then culled his catch, throwing back the seed and sorting through the rest.  The prized little necks and top necks for raw bars at swanky parties, cherry stones for clams casino featured as "specials" on seasonal restaurant menus and  the biggest ones, the chowder clams with the toughest, chewiest meat and the most juice used for clam chowder and stuffed quahogs. As he continually went through this process over and over again for hours at a time, he mentally calculated the price he would receive at market the next day when my mother dragged us kids to sell the smelly bag full of shellfish before heading to the beach for our early morning swim lessons.
Unfortunately, during those years, I did not understand or fully value the level of sacrifice to provide extra income for our family.  (Now that I lose sleep wondering how to pay for my own kids' needs, I often think about how quahogs paid for my college education.) Back then, I also hated the intensely strong, briny taste of those hard shelled clams.  To look at the meat as my mother chopped it up for stuffed quahogs or to watch as my dad slurped down a raw little neck seasoned with just a squeeze of lemon, made me gag.
I honestly don't know when I came around the bend, when it happened that I actually liked the taste of shellfish.  Was it out with friends after work in a local dive bar, ordering cups of hot, steaming chowder and a beer, the bottle sweating and the label peeling off?  Maybe sampling a bite of stuffed quahog: savory stuffing studded with crispy, fried linguica?  Perhaps at a fancy, wedding in a country club I would otherwise never attend, a full raw bar on ice to show off the wealth of the bride's family?  I probably threw back a few raw bivalves topped with spicy cocktail sauce after being emboldened by the free drinks at the open bar.  Your guess is as good as mine.  Whatever the reason, and however I came to appreciate and truly enjoy the fruits of the sea doesn't really matter to me now.  I love that salty chew of the meat in a creamy chowder, the briny taste of the ocean in one gulp of raw fish on the half shell and best of all, I can't get enough of a good stuffed quahog, a meal in itself with the calorie count to match.  That buttery, salty stuffing, a squeeze of lemon, a few dashes of Tabasco sauce and an ice cold beer to wash it all down.  Heaven.

Stuffed Quahogs appear on almost every menu in restaurants on Cape Cod.  Even Mexican and Italian places often have their own versions of this local classic.   It's fun to make the rounds and sample everyone's version of what they believe to be the "best".  However, I still think my family's recipe is hands down the winner.  It's a bit of an undertaking to make a batch but if you do, add your own flair and call them your own "secret" recipe. 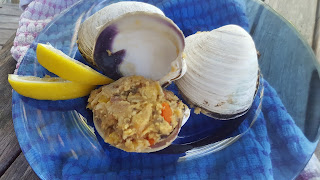 Stuffed Quahogs
(makes about 15)
Double or triple this batch and freeze stuffed quahogs individually up to 6 months.

Remove casing from linguica and cut into small pieces.  Cook on medium high in a large skillet until the edges become crisp, about 8-10 minutes.  Drain on paper towel.  Once cooled, cut into even smaller pieces/crumbles. Set aside cooked meat.

Dice onion and red pepper. Melt butter in a large skillet.  Add onions and red pepper.  Saute until softened, on medium high heat, about 10 minutes.  Smash Ritz crackers in a large bowl or pulse into small pieces using a food processor.  Add Ritz to butter mixture.  Stir to coat. Add Tabasco and cooked linguica.  Chop quahog meat into small, bite sized pieces (works well if quahog meat is slightly frozen).  Add to stuffing.  Add enough quahog juice to moisten stuffing, being careful not to add too much. Cook for stuffing for 7-10 minutes until a thermometer registers 165 degrees.  Taste and season with salt and pepper, if necessary.

Remove skillet from heat.  Allow to cook for 5 minutes.  Scoop stuffing into cleaned quahog shells, mounding up stuffing.  Top with matching shell.  Wrap each stuffed quahog in plastic wrap.  Keep in refrigerator up to 5 days or freeze for up to 6 months.