When I am feeling stressed and the world seems completely out of control, I take to the kitchen and begin to bake.
Once after a particularly brutal encounter with a customer, I found myself sobbing as I measured out butter and sugar then whipped it into a frenzy in my trusty Kitchen Aid mixer.  Those chocolate chip cookies never tasted so good.
Lately, I'm feeling like all the signals in the Universe are somehow crossed and nothing really appears to be going quite right.  Sure, my family is happy and healthy but I'm lost in my own quagmire, seeking ways to get out of it but stumbling and falling, not at all successful.  That's when I need to drop everything that I'm "trying" to accomplish and do what a former head honcho for a retail company I once worked for would say, "Control the controllables."  He meant, when only a few customers walk through the door, build the sale instead of looking for multiple sales.  Control what you have in front of you instead of looking for something that's not there (and complaining about it).  Well, I have a pantry full of  "bakeable" ingredients.  So, I'm going to make marshmallows.
Not just some Jet Puffed knock off.  These are honest to goodness pillows of sweet satisfaction.  Soft, spongy and I can make them as big as I want.
Once I decided to make the marshmallows I had a moment of divine inspiration ....SPRINKLES. Much like glitter is to crafting, sprinkles add that extra "je ne sais quoi" to food that nothing else can.  Not chopped nuts, Not shredded coconut, Not powdered sugar. Rainbow nonpareil sprinkles, thank you very much.
Although this recipe is technically not baked, rather it's cooked on the stovetop, then poured into a pan and left to set up, that's all just semantics.  The main point is that marshmallows really can make the world seem like it's properly spinning on it's axis again and few sprinkles can only make things even better. 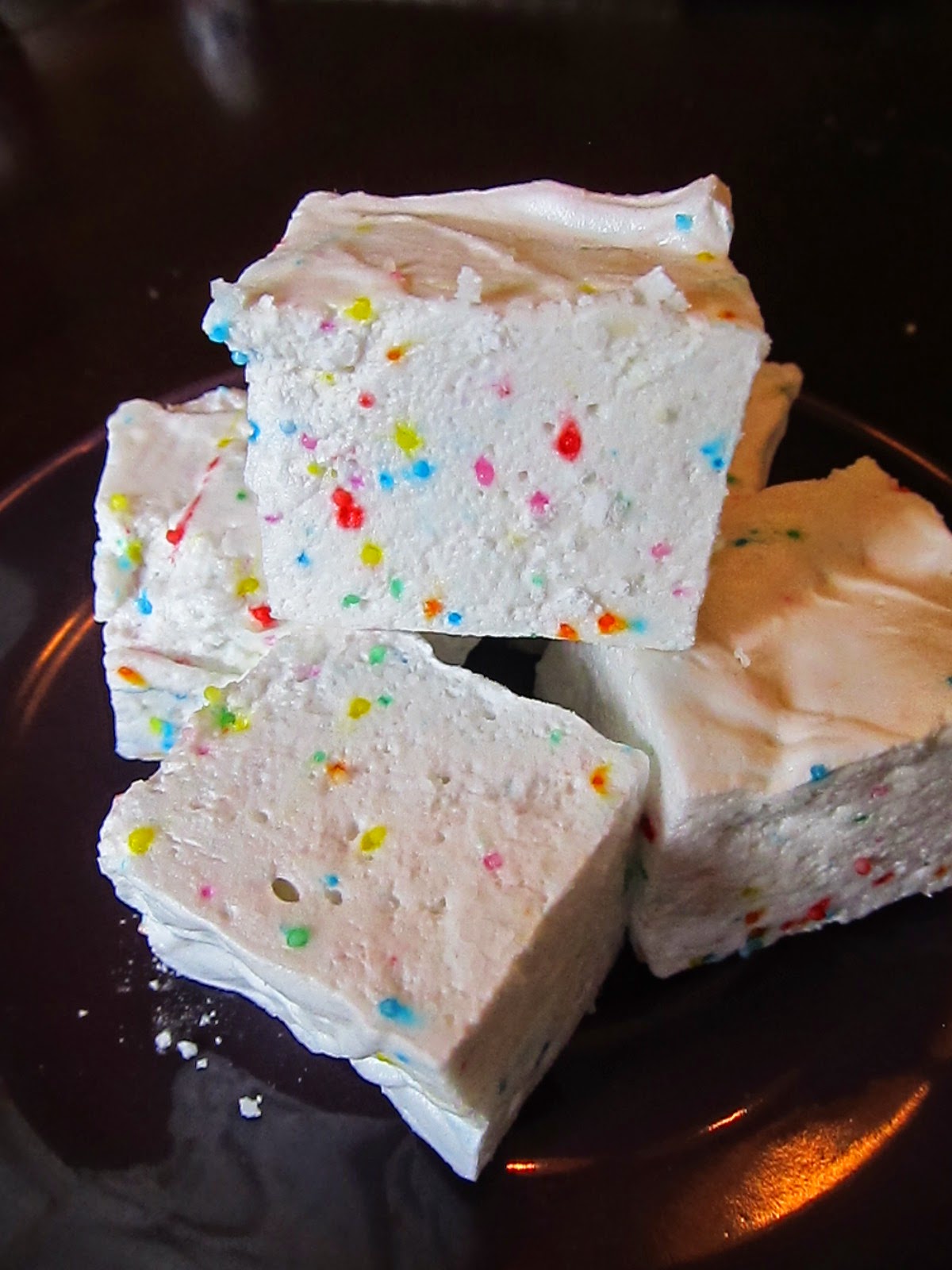 
Confetti** Marshmallows
("Adapted from Jam it, Pickle it, Cure it" by Karen Solomon)
(makes 16 large marshmallows)
﻿
vegetable oil﻿
2/3 cup water, divided
3 (1/4 oz.) envelopes unflavored gelatin
1 cup granulated sugar
1 cup light corn syrup
pinch of sea salt
1 teaspoon vanilla extract
2 tablespoons nonpareil sprinkles (rainbow, please)
1 cup confectioner's sugar for dusting
Lightly oil the insides of an 8"x8" baking dish using a small amount of vegetable oil. Generously coat the oiled surface with confectioner's sugar.
Pour 1/3 cup water into the bowl of a stand mixer.  Sprinkle the packets of gelatin over the water and let stand for 10 minutes until the gelatin has softened.
In a saucepan, combine 1/3 cup water, granulated sugar, corn syrup, and salt.  Heat mixture on medium high.  Cook the mixture without stirring until it reaches 240 degrees on a candy thermometer.  Remove from heat.
With the mixer on low speed, carefully add the hot syrup to the softened gelatin.  Add vanilla.  Increase the mixer speed to medium high and beat for 8-13 minutes until mixture becomes white, stiff and sticky.  Add the sprinkles and mix to combine.
Spread the mixture into the prepared pan using a lightly oiled spatula.  Wet your hands and press the mixture into the corners of the pan.  Set marshmallows aside for at least an hour for them to become firm and cool.
Loosen the marshmallow from the pan with a wet knife.  Cut the marshmallows into squares, rewetting the knife as needed.  Toss marshmallow squares in powdered sugar to prevent from sticking.
Store in an airtight container for up to one week.
*These are spectacular when toasted over an open flame.  I like to light a burner on my gas stove and let the kids go to town.  Sometimes we get out the graham crackers and chocolate bars and create the most amazing s'mores....EVER!!
**Ava claims she created the name for these marshmallows while Declan demands to be known as the person who came up with the idea of mixing the sprinkles into the marshmallows instead of pouring them on top.  Meanwhile, I'm just the person who executed the plan.﻿