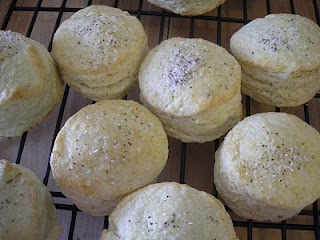 Preheat oven to 450 degrees.
Combine flour, baking powder, baking soda and salt in a food processor. Pulse to combine. Add the cold butter and crisco. Pulse a few times until the butter is the size of peas. Add the buttermilk and pulse until mixture just begins to come together.
Place dough on a lightly floured board. Roll out to about 1/2" thick. Cut with biscuit cutter and place on parchment lined baking sheet. Press together scraps of dough and repeat until all dough is used. Brush the tops of the biscuits with the cream and bake for 12-15 minutes until golden brown. Remove from oven and brush with melted butter.
at April 26, 2010