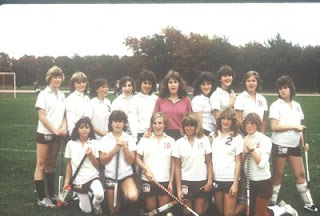 Facebook is a funny and great thing especially when you are able to "friend" people from your past. Yesterday, my old freshman field hockey coach got in touch with me. (By "old" I really mean former since she is most likely only about 5 years older than me!)
When I saw Maura's name on my friend list, I immediately recalled the white frosted chocolate cupcakes decorated with crossed sticks and each of our jersey numbers which she made for our end of the season celebration. I can't remember any big games or a tie breaking goal in the last seconds of a critical game, just the cupcakes and all the fun we had. C'mon, if you know anything about me by now, it's that everything leads back to the food.
Maura came to us when we needed her much like a 1980's Mary Poppins with big hair and a bigger smile. The Falmouth High School athletic department didn't know what to do with all of the freshman girls who went out for the team in the fall of 1983. A few of my classmates went to the JV team and the rest of us were left to wonder what would become of our season. We were sceptical. I think Maura arrived late on her first day which added to our teenage attitude. One of the things that saved that first day was our desire to have fun and play the game, the other thing was Maura's enthusiasm. It won us over.
Some of the best times I had playing high school sports were spent with the girls on that team. We laughed a lot and became a tight knit group of ragtag players wearing cast off uniforms. We may not have had the skill to make the JV team but after that first day, we no longer cared. Our team was special: the first girls field hockey freshman team coached by Miss Maura Jepsen.
at April 14, 2009