City Guys At The Beach 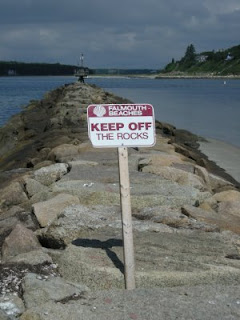 Relaxing on the beach is one of my favorite summer pastimes. On Sunday afternoons, I often get together with some friends and we hang out on the Heights Beach in Falmouth, MA to enjoy the sun, surf and conversation. That is, until the "City Guys" show up.
A posse of 4-6 young men in their 20's-30's tossing a football and lugging large coolers always park themselves close to us, behind the lifeguard chair that sits about 10 feet away. They announce themselves in loud voices as if projecting on stage so that the rest of the beach going population can "enjoy" the performance. In a matter of minutes, we all know their silly nicknames and which one of them drank to much last night. That's about when "Sully", "Cheese", Whitey", "Fitzie" and "Dopey" started throwing the football around. Anyone else would have noticed the large sign mounted on the back of the adjacent lifeguard chair that listed the rules of the beach. Especially since the ball missed its intended target a few times and bounced off the sign. Maybe such rules don't apply to them. It's still a mystery to me. Anyway, for as long as I can remember, the sign has stated: NO BALL PLAYING. After the third errant pass that almost hit the lifeguard....

Now the fun has to end. The entertainment is over. All seems quiet and we resume the conversation we started before this special presentation. But wait...
One of the city guys has climbed onto the jetty right in front of us. He is bear walking along the rocks that are covered in slimy seaweed. This is a dangerous act. One could slip and fall off bleeding with jagged cuts into the water below. We whisper and motion to each other to watch. Was the lifeguard going to...

"TWEEEEET!!!" a piercing whistle blew through the air.

Everyone on the beach looks over to the guard who is motioning for Fitzie or maybe it is Dopey (yes, it's definitely Dopey) to get off the rocks. Everyone that is, except Dopey. As the guard continues whistling and motioning, it is obvious that Dopey has not seen the sign that clearly reads: "DANGER:KEEP OFF THE ROCKS". Finally, as the guard jumps down from the chair and walks over to address the offense, Dopey realizes all the commotion is directed at him.

Once all his friends finish clapping him on the back, it's time for some refreshment. The city guys pull beers from their coolers and take a rest for now. Please don't make me tell the rest of the story. I sincerely hope all of you are smart enough to know. The sun, the ocean and alcohol make for a very unpleasant mix.

P.S. These events are all true but names have been changed to protect the not so innocent. To all of you "City Folks", please don't be offended. I know you are not all bad. I married a guy from Dorchester.
at July 15, 2008