Stubbed Toes and a Fractured Metatarsal 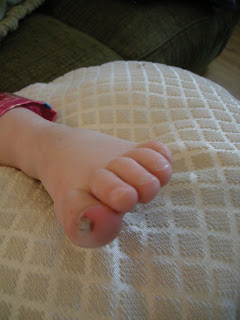 Last week, for school vacation, we couldn't have had better weather. It was a bit of a tease-bright sunshine, warm and balmy everyday. Instead of the usual middle of April weather, we were transported, briefly to the end of May.

This is the kind of weather that makes young children (and some grown ups eager for summer to arrive) take off most of their clothes. One afternoon while playing outside at Gramma Val's house, Ava decided she didn't need her shoes. No sooner did I warn her of the dangers of bare feet and concrete ("Get your shoes back on before you hurt yourself!"), did she trip and tare the skin from the top of both of her big toes. According to Ava, there was lots of "bleed". Thankfully, there were not lots of tears, at least until we got home. She screamed bloody murder when I put her in the tub to soak her injured "tootsies". ScoobyDoo bandaids helped to sooth the wounds.

Ava's "condition" improved after a few days. Which means the drama ended, or so I thought.

Ava's new bed with its thick, mattresses making it just shy of 3 feet high seems to be very enticing to her two year old brother, Declan who stands at about the same height. The problem isn't that he wants to climb up and lay on it. It's the flying leaps off the bed that pose the problem. If you don't properly "stick" the landing, you may get injured. Declan learned this when he landed and planted his big toe into the carpet with the rest of his body weight on top. Considering he was only wearing a diaper and no other "protective" clothing, his bare foot took quite a beating. Of course, all of this happened while I was trying to make myself look presentable for the day. My goal was to get to the supermarket before going to work and I was more focused on what I wanted to accomplish than what my children were doing in the next room. I was just relieved that they weren't torturing each other.

After a lot of screaming, crying and rolling around on the floor in pain, I finally figured out the injury was to his foot. I really didn't think it was to bad so I tried to put his shoe on. Declan's screams let me know this was not a good idea. Still convinced that my agenda was in the plan for the day, I went to find his sandals. I put Declan down. My plans clearly changed when he let out a howl and refused to walk or put any weight on his foot. You can imagine the rest: pediatrician's office, xrays at hospital, diagnosis: fractured 1st metatarsal.

Believe it or not, the trip to the hospital wasn't so bad. We scored some free frozen yogurt in the cafeteria. ( I must have looked pretty pathetic juggling a 25 pound toddler, a tote bag full of toys and diapers with my only helper a precocious 4 year old who kept dropping all of our snacks on the floor.) And Ava got to "look at Declan's bones on the puter" when they took the xrays. Hey, I'll take my week of foot injuries any day compared to someone I know whose kid had diarrhea the whole vacation.
at May 03, 2008