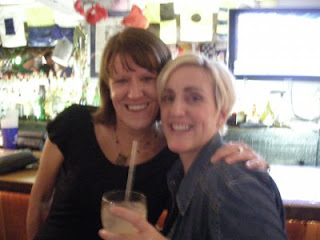 When my anxiety rears it's ugly head and takes firm hold, I know I can rely on my family and friends to wrestle me back to reality. Although, I am aware,this can be quite an undertaking.
The past month has been wrought with high anxiety which manifests itself by generally spastic behavior (beyond my normal level)and in my difficulty to breath because of my control "issues". I've become manic about clean floors, washing every bit of clothing in sight as well as disinfecting anything I deem full of germs. Anyone who deviates and does not behave exactly how I want them to (read: my husband, preschool age children and dog) are subject to my yelling like the crazy lady I have become. Ultimately, all my antics tend to do is make me feel worse. I'm afraid I might die and the only memory people will hold is me acting like a raving lunatic.
It's for times like these that my people deserve my undying (Ha! Ha!) thanks. They not only willingly put up with my mania but they also step in and help, performing their own type of intervention.
A couple of weeks ago, when my gulping for air and constant yawning in an attempt to get more oxygen into my lungs was at its peak, Ted attempted to get me to laugh my way out of my syndrome during one of our weekly coffee sessions. After an hour of collaboration on a ridiculously made up story about a serial killer and the deranged woman who loves him, he said,
"So, is the anxiety all better, now?"
I laughed. Funny, just like a man to think he can "fix" it so we can all move on. But it was heart felt, so I truly appreciate the sentiment.
Throughout the madness, Debbie has been dutifully inviting us over for dinner and supplying Proseco and plenty of red wine along with love and understanding.
My mother's daily phone calls to check in have helped abate some of my more chronic symptoms. Not to mention the trips to get ice cream at Smitty's to feed the kids "dinner" and get my mind off of things.
My fear of "doomsday" behavior I'm sure has thrown my husband over the edge but he continues to keep it in check. He continues to fold the laundry and wash the dishes after dinner all in hopes that I will come back to a quasi-normal state of being.
Perhaps the best thing that happened or was planned at the last minute was the drunken stupor and hangover that followed the weekend before I went under the knife. My good friend and former roommate, Sarah came down Saturday to go out on the town (such as it is) that evening. Coincidentally, Rob had secured a babysitter to take me out to dinner so our driver was in place for the night. It all started innocently enough, dinner and some wine at Phusion. When we finished, the night was still young so it was decided that we would make a few stops in Woods Hole before heading home. When I stood up from the table, I felt a bit light headed but quickly ignored it. After all,I ate dinner and only had two glasses of wine, equivalent to any night at home.
At the Cap'n'Kidd, I chose to go for vodka, thinking this would be my best bet for a few more drinks. My favorite is a Greyhound with fresh squeezed grapefruit juice, never the stuff that is poured out of a tin can. Since the "Kidd" does not offer my choice, I went with vodka and soda with a splash of cranberry and the squeeze of a lime.
Next, we were off to Shuckers where they always have the fresh squeezed option but are only open for the summer season. I should have known I was in trouble when I claimed that "I lapped" Sarah and Rob by downing two Greyhounds to their one beer each. I remember walking to the "Leeside" and asking Joe, our favorite bartender and old friend repeatedly why they took the condom machine out of the ladies room about 10 years ago. Then Sarah and I played some tunes from the juke box and I refused to leave while Huey Lewis and The News sang, "Do You Believe in Love". 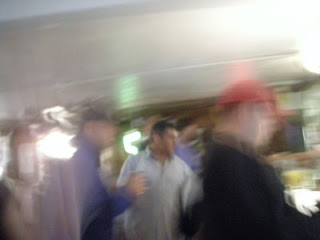 Good friends know when to hide you from the fourteen year old babysitter to save you from future embarrassment and help you to get into bed safely. The next day I woke up with an excruciating headache and still wearing most of my clothes and jewelery from the night before. I could barley peel open my eyelids that were caked with smudged mascara. I can't remember the last time I was this sick. I really don't think I have ever been in such bad shape. The good news is, I realized I would rather have anxiety than a hangover like that any day. And I've never been more thankful for my friends and family who try to understand and actually put up with me.

Here's how to make your own medication:

Place ice into pint glass. Pour vodka then grapefruit juice over ice and shake 2-3 times. Pour into glass. Drink up.
at May 30, 2009