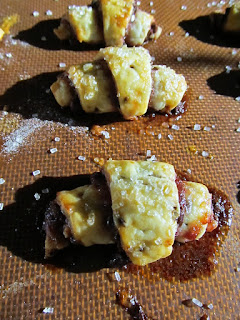 I really don't know much about Hanukkah or any other Jewish holiday.  (I even have to check the spelling every time I type the word.)  But when you have friends who are Jewish or any other religion/nationality other than your own, it makes me want to learn more about all of it, especially any traditional food that might go along with a holiday or celebration.  And if the recipes are really tasty, then I want to get know it as much as humanly possible by immersing myself  in research and by research, you understand, this means cooking and eating.
Our friends Molly and Dave (and their two young sons) are Jewish.  The nice thing is that they are quite tolerant of all of my questions, in particular the ones about recipes and dietary restrictions.  Another excellent thing about them is that they are game to try just about anything I concoct in my kitchen.  They are both incredibly willing and enthusiastic participants when it comes to my culinary experiments.
Considering it is Hanukkah, I have been trying to come up with an edible gift for them.  I already stashed away a jar of Bourbon Cherries for Molly.  If she doesn't want to share them with Dave, that's her business, not mine. Of course, the booze steeped cherries and not for children.  So, a baked item is definitely in order.  Since I am not familiar with traditional Hanukkah sweets, I googled it.  There were many delicious items. Some fussy, many deep fried and some that I just did not feel inspired to make.  Epicurious.com saved me with an article which caught my eye featuring a few recipes of rugelach.  Considering the dough is basic and it's up to the baker to decide on any number of filling options, I feel the possibilities to be just about endless and I am very likely to find something of use already in my pantry.  The best one out of the bunch looked to be by Dorie Greenspan.  She won me over first with her story about how this recipe became part of her repertoire long before she became a household name and an authority on home baking.  Indeed, according to her it is one of the first cookies she was able to master.  Anyway, I found the cookies from the recipe to be fantastic and everything you could want: crusty, sweet and a bit of crunch from the sugar on top.  After they sit for a day, they get a little softer from the jam filling.  (I used raspberry jam, mini chocolate chips, cinnamon and sugar for the filling, but you can choose whatever you like.)  As for Dave and Molly, I'm not sure if they ended up sharing the rugelach with their boys.  Perhaps they squirreled them away with the cherries to be enjoyed after children go to bed.  Late night cocktails and cookies?  Now that's my kind of celebration! 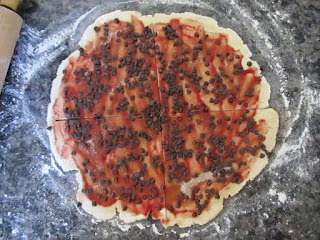 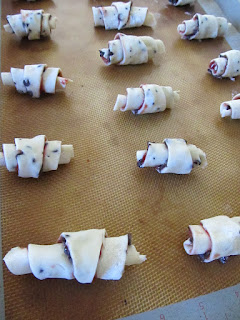 Rugelach
by Dorie Greenspan October 2012 Baking: From My Home to Yours

Serving: Tea is traditional, but we drink coffee with rugelach. These are pretty and, even with their jam-and-fruit filling, not overly sweet, and they are even good with sparkling wine. Storing: The cookies can be kept covered at room temperature for up to 3 days or wrapped airtight and frozen for up to 2 months.

For the whole story on Dorie's rugelach:
http://www.epicurious.com/recipes/food/views/rugelach-51127400
For the Bourbon Cherries recipe (Substitute bourbon for vanilla vodka and add 2 more tablespoons of sugar):
http://notesfromvalskitchen.blogspot.com/2015/12/naughty-cherries.html 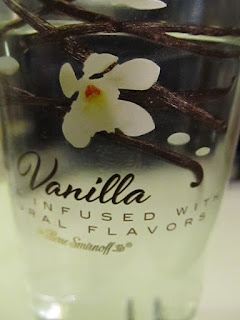 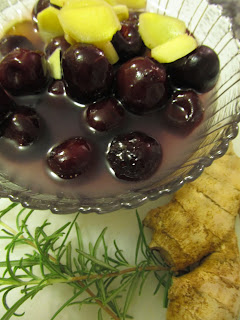 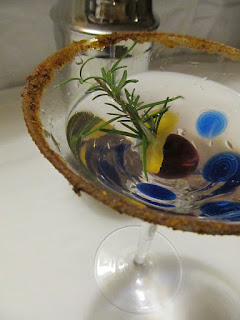