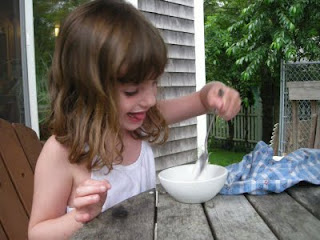 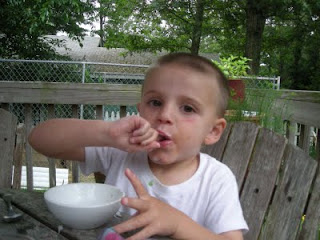 As Ava stirred and Declan ate, I thought about the time my sister Karyn and myself, ages 9 and 5 made our own invention out of ice cream at the "dining room" table in the house at 540 Old Meeting House Road where we grew up. Our inspiration came from an advertisement broadcast during our favorite tv show. We spent our young and formative years watching "Little House on the Prairie" on our old black and white with rabbit ears while our mother wished that "Calgon [would] take [her] away". TV was influential and it motivated us to pretend to transform Breyer's (considered pretty gourmet back then) chocolate ice cream until it became as thick as frosting. It was the 1970's and Betty Crocker had just come out with the incredibly innovative frosting in a can...ready to spread complete with a mouth watering televised advertisement and catchy jingle that made all the kids sing for the delicious, trans fatty prepared frosting. We sang the last line "Betty Crocker ready to spread frosting!" with a flourish on "ing" as we spread our melting ice cream on Nilla Wafers and popped them into our mouths. I'm sure my mother couldn't wait for us to finish and get up from the table so that she could wash the dishes and be done for the night. Just as I implored my two to "eat up" and "wipe your mouth and hands with your napkin" in anticipation of baths and thankfully, bed time. As children will, they had no concept of time or the fact that their mother might be tired after a long day of discipline, tears, laughter and hugs..(where's that Calgon?). Ava and Declan were having a great time, making a mess and getting themselves covered with sticky ice cream. Yes I am tired but I must admit, there is nothing better than having a few laughs and playing with your food with one of your siblings.
at July 29, 2009 No comments: